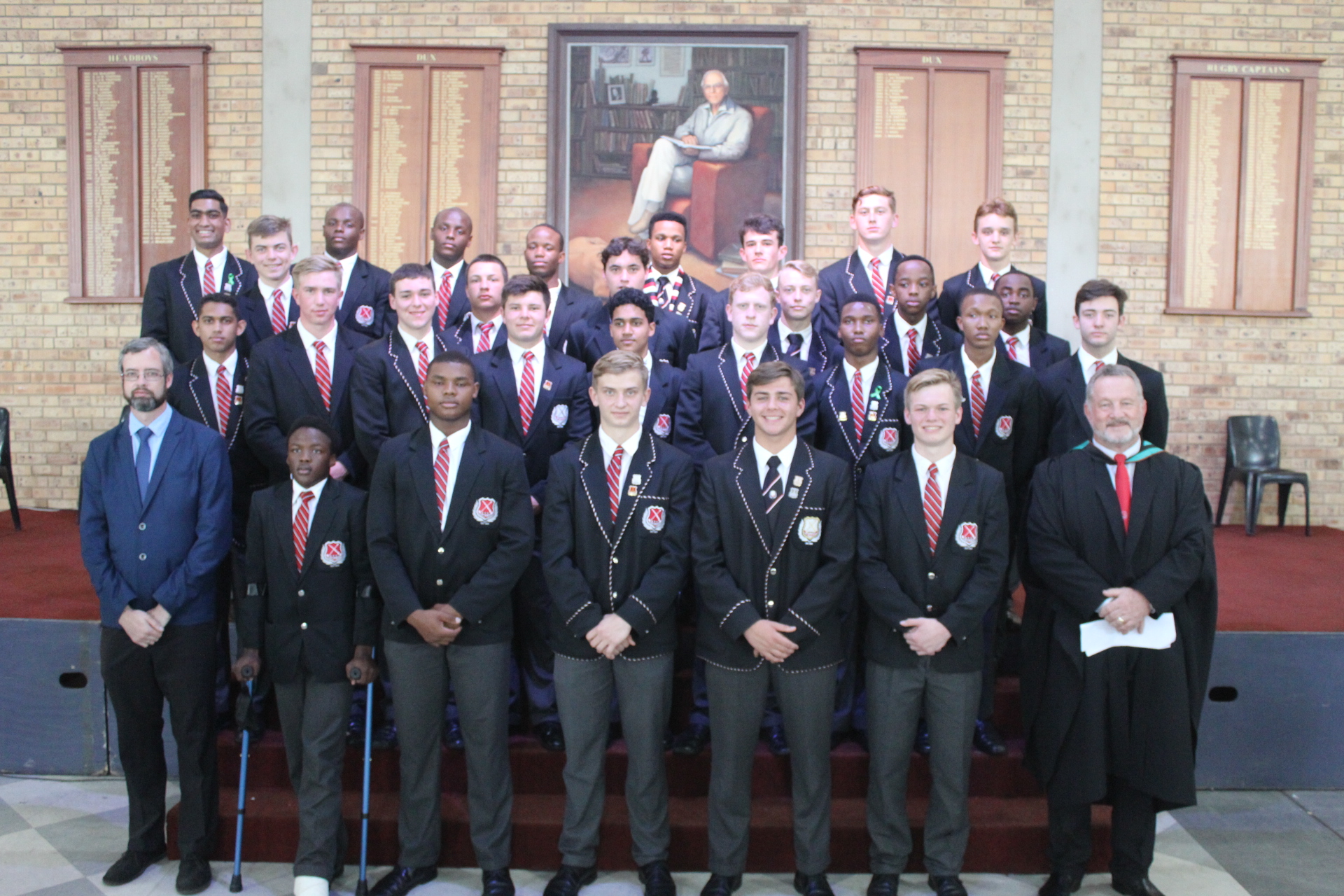 Today we held the tenth annual Passing of the Drum Ceremony on our campus, a formality first introduced in 2012, to celebrate the appointment of the school’s pupil leadership for the next year. These include our head and deputy head prefects, prefects, shouting captains, and house leaders.

To be appointed as a College Prefect is one of the highest honours that the school can bestow upon a pupil, and along with the honour, comes accountability and responsibility. These boys have endured a rigorous process to achieve this honour and they would not have been appointed without the wider College’s pupil and staff support. College appoints five senior prefects to lead this team; and we extend our sincere congratulations to our Head Prefect for 2022, Keagan Goddard and our Deputy Head Prefects; Sphephelo Mbonambi, Joshua Munn, Zibusiso Shongwe and Tian van Heerden. 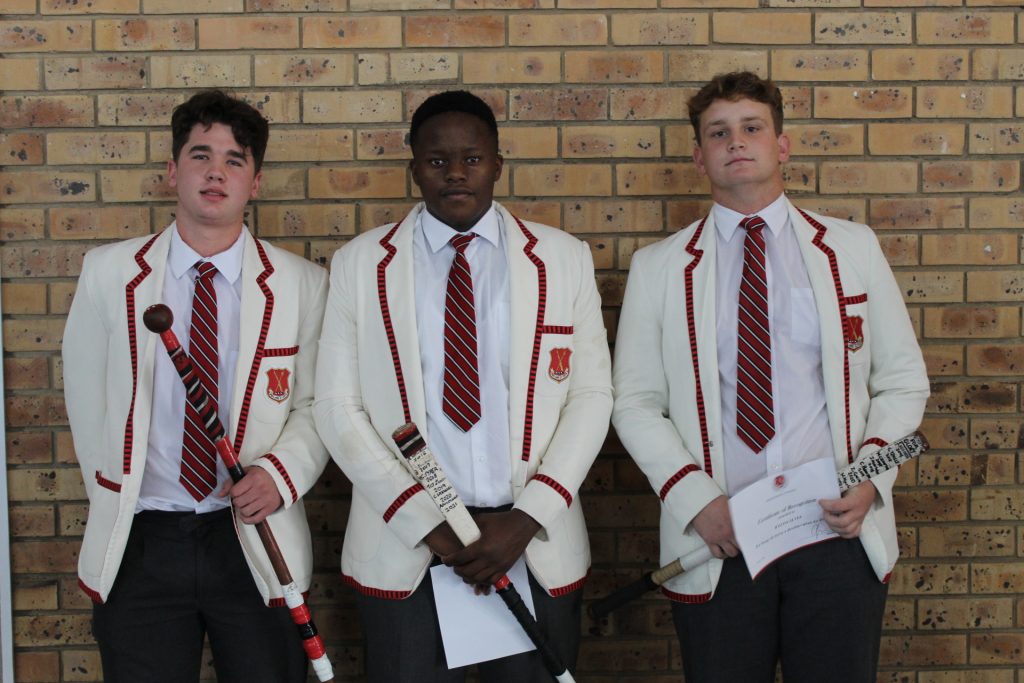 We also announced the three shouting captains for 2022 – congratulations to Ricardo Goncalves, Thomas Koller and Neo Mokoena. These young men have a unique role at a school like Maritzburg College, with its emphasis on spirit and camaraderie. Voted for by their peers, each year it is the job of our Shouting Captains to inspire and cajole the troops on Basher Ridge, on Pape’s and elsewhere, to get behind our College men.

Today we named our house leaders, house captains and vice captains for the 10 day houses – our “homes within a home” at College. These young men are given various portfolios and assist the housemaster and staff in running the houses on a daily basis.

The five Border prefects who lead each of the boarding houses at College provide support to the boarder masters and boarder staff necessary for what is the largest Public School boarding establishment in the country, with its own particular culture and traditions. It is their job to ensure a happy, efficient and disciplined home for our 500 boarders. Today, we congratulate Sphephelo Mbonambi, (Head of Nathan House and Senior Boarding Prefect), Joshua Munn (Head of Clark House), Minenhle Ngubo (Head of Hudson House), Neo Mosebi (Head of Shepstone House) and Johnathan van Zyl (Head of Elliott House). 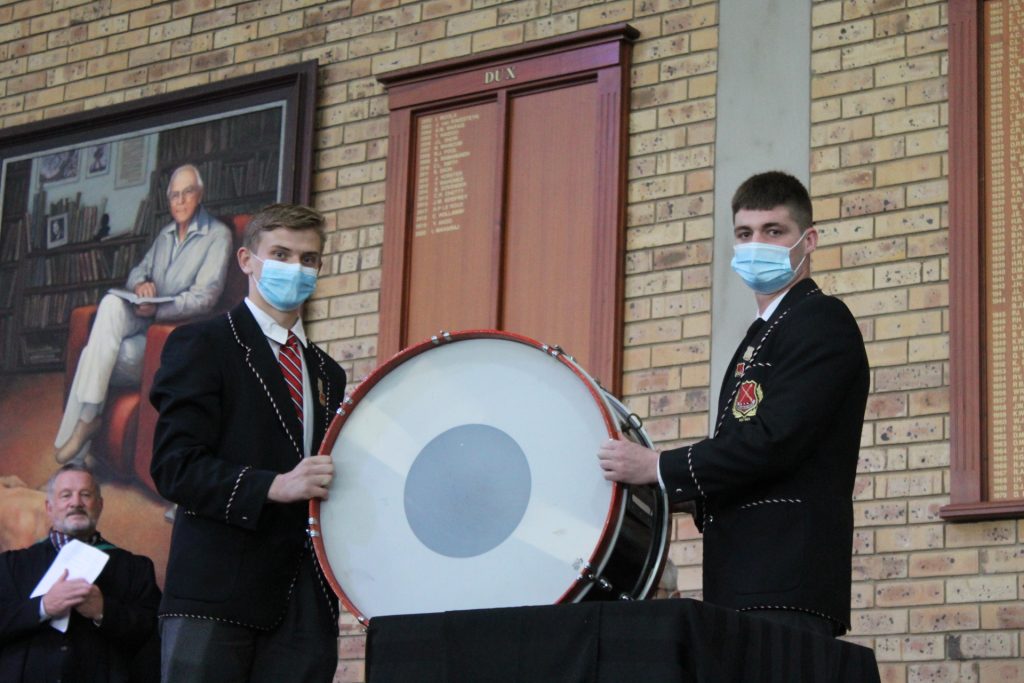 A very special part of this assembly at College is the passing of the drum from our outgoing Head Prefect to the new incumbent, symbolising the passing of authority between these two boys. For many years it is the tradition that an outgoing College head prefect places a written message of support to his successor in the old drum. While this long-established tradition continues, the original old Thrash Drum that was used is now housed in a permanent case on display in the Victoria Hall, and a side-drum from the old school cadet band is used to symbolise the passing of authority from the prefects of 2021 to the prefects of 2022.

At the 2021 ceremony, outgoing head prefect, James Beauclerk placed his personal message of support to the head prefect for 2022 in the old drum, and handed the custodianship of the drum to Keagan Goddard, as a symbol of the passing of his authority.We wish all our leaders well for 2022 and know that, as a school, we place our support, our trust and our confidence in you as we move into the new year.