For the next entry in our series following Boyd Edmondson’s journey from before, during, and after College all the way to his impressive selection as captain of the Emirates Golf Club in Dubai we  look at his life post-College. Here Boyd shares with us a look into how he came to live in Dubai and tells us a little more about The Emirates Golf Club and what his captaincy means to him.

If you would like to remind yourself of the previous articles, the links are below: 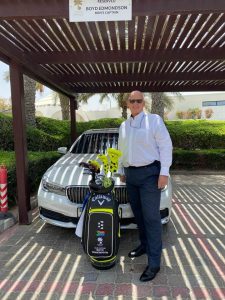 I have lived within the Middle East since April 1999. Firstly, in the Sultanate of Oman for two years and then moving to Dubai. Whilst my oldest daughter Hannah was born in Johannesburg and then came across to the Middle East, my youngest daughter Kirsten was born in the Sultanate of Oman. It is a massive move to relocate for business purposes to new territories. I have been richly blessed being married to my wonderful wife Althea, who also was a ‘Maritzburg Girl,’ who has always been a wonderful support throughout our married lives.

I have been actively involved in golf within the Middle East since we arrived in the region, and have been involved with the European Tour and Ladies European Tour for the last 15 years with a number of the Middle East events, in various roles. It is truly special to see golf being played as it should be. I’ve had the privilege of being involved with likes of The DP Tour Championship and our very own (Emirates Golf Club) Omega Dubai Moonlight Classic and the Omega Dubai Desert Classic. What a privilege to walk the fairways where the greats of the game have walked.

After a somewhat lengthy wait, my family I and were finally able to work our way through the Emirates Golf Club members waiting list to finally become members in 2007. The club became a second home for my family with its magnificent facilities. It is a truly a world-class place, with tennis, gym, paddleboard, swimming pool facilities, floodlit 9-hole Par 3 course (a true par three course, with the longest hole being 197 yards). There’s also the absolute bonus of the club being the fully floodlit 18 Hole Championship Faldo Course and the World Renown, Majlis Course, which hosts the Omega Dubai Desert Classic each year. We had an excellent run with the Omega Desert Classic winners for two consecutive years, with both Danny Willet and Sergio Garcia, winning The Masters the same year that they won The Omega Desert Classic. Sadly, the run came to an end, but we are still graced with the best players in the world turning up for the Omega Dubai Desert Classic each year.

I had been asked some four years ago by our incredible club management team if I would consider the role of Club Captain. I obviously responded that I am sure I would take on the honour if formally asked in the future. That request came officially at the beginning of 2019, and whilst accepting the honour immediately, there was some apprehension – as I realized that the only fear I would have in fulfilling the role, would be “THAT” Season Opener Captains Drive.

It is a grand affair on the 1st Tee Box for the Season Opener, with the incoming Captain being formally given his Green Captain Jacket by the outgoing Captain. This is then followed with “THAT” drive, surrounded by all our members, and I can assure you, much good-hearted banter. Any “indiscretion” with that drive and I can assure you, you will be brought up by the members at the beautiful gala dinner following the end of play.

The role of Captain is a role of great enjoyment, alongside regular appearances for and on behalf of the club, prize presentations post-golf events, sharing in the presentation ceremonies for the Omega Moonlight Classic and Omega Dubai Desert Classic and countless speeches. There too is an active aspect to the role of being Club Captain in facilitating our monthly Members Consultative Committee meetings alongside the Handicap Committee Meetings.

A very special event which I will share in this year is the wonderful development of the TopGolf facility that will be opening this year on the site of the Faldo Driving range which has been redeveloped. It will be a very special day to share in as the TopGolf Concept is superb, brings many people together and is a wonderful entertainment facility built around the game of golf.

We at the Emirates Golf Club, are richly blessed with a full Golf Operations team. In many clubs, the responsibility of the draw, scorekeeping and prize-givings are handled by the Club Captain. I am happy to say that these roles are magnificently handled by our Golf Ops team.

I do look forward to the path ahead as Club Captain at the Emirates Golf Club. It would be an incredible honour to host anyone from the College family who find themselves in Dubai. I am sure the MCOB Association will give you my details. I also look forward to paying a visit to College over the next year – understandably this will depend on the current situation we all find ourselves in.