aans authors, Zelda Bezuidenhout from Parys and Nanette van Rooyen from Hout Bay in Cape Town on 21st February 2020.  Kathie Viljoen from LAPA Publishers was instrumental in bringing these two talented writers to the schools in KwaZulu-Natal.

Zelda spoke to the boys on her novel Ses weke van Thomas en Ella as well as As mens geluk kon proe which was awarded the second prize in LAPA’s Youth novel competition in 2017.  Nanette in return informed the boys about her research on graffiti art which was a prominent theme in her novels Ons was hier and Die 17de veer which was awarded the third prize in the abovementioned Youth novel competition.

These two well-known writers spoke to the three top Afrikaans classes in Form 4, Form 5 and Form 6.  The interactive, comfortable way in which these ladies presented their books and encouraged the pupils to read and write were enjoyed by all the senior boys and Afrikaans teachers who attended.

The drive for their visits to schools in KwaZulu-Natal was to motivate pupils to read.  According to world-wide research, reading improves creativity, develops language skills and also helps pupils to achieve better marks in Maths, as both the left and right hand side of the brain are stimulated, and the negative impact of digital footprint products is counteracted. 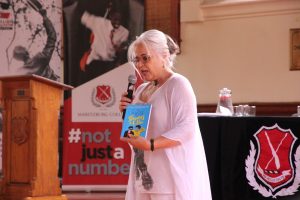 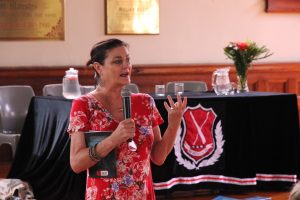