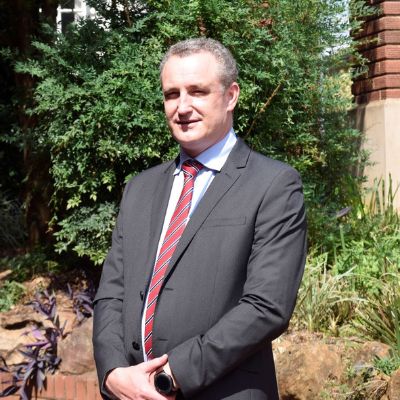 Wayne Evans was born and raised in Pietermaritzburg. He matriculated from Maritzburg College in 1990, after which he went on to complete a Bachelor of Commerce and Post Graduate Diploma in Accountancy at the University of Natal and subsequently registered as a Chartered Accountant.

Wayne commenced his career at Ernst & Young in 1995 and in 2002 he joined the public service, working in the Department of Transport and then the Department of Housing where he was responsible for implementing the PFMA which aimed to modernise financial management and accountability of government departments.  These roles provided the necessary foundation for his appointment as the Chief Financial Officer of the Department of Transport in September 2008, where he was responsible for the financial management, budget and supply chain management functions of the department.

In 2017 he married Ingrid and became an instant dad to two beautiful daughters.

Wayne joined Maritzburg College in February 2022 as the Commercial Director, where he strives to provide leadership over the financial management of the school and to guide College to grow sustainably.