The Case Of The Prince's Collection | Maritzburg College 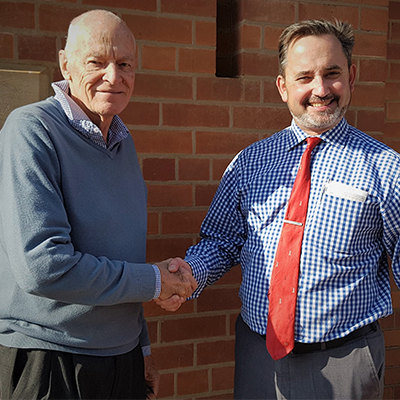 Mr John Muirhead Deane, an Old Collegian of 1950 vintage, and Mr Matthew Marwick, the chairman of the school’s archives committee.

The Case Of The Prince’s Collection

The Maritzburg College archives committee is delighted to be able to launch – in heritage month – a unique Sherlock Holmes short story set in Victorian Maritzburg.

The short story was penned by John Muirhead Deane, an Old Collegian of 1950 vintage who taught at the school for over a decade and rose to Chief Director of what is today the KZN Education Department.

In the story, which is written with an authentic flourish that does justice to Sir Arthur Conan Doyle himself, the inimitable Mr Holmes finds himself in Maritzburg in the early 1890s, hot on the trail of a devilishly cunning burglar of Government House.

Holmes’ brief adventure in the Colony of Natal – “The land of the redoubtable Zulus, who gave a good account of themselves against some of our best regiments”, as Dr Watson describes it – sees him trying to solve the mysterious disappearance of relics that belonged to the late Prince Imperial.

In the course of his investigations, he finds himself on the north bank of the Msunduzi River, from where he spots a large, brick building about 500 yards away, and correctly (of course!) surmises –

“That rather fine-looking place is unlikely to be a monastery, I think, . . . so I assume it is either a hospital or a school.”
On the following day Holmes comes into contact with the headmaster of the institution in question, the genial Mr RD Clark – the ‘Father of Maritzburg College’.

The chairman of the school’s archives committee, Matthew Marwick, described the story as “A terrific read, which will no doubt be of great interest to especially Maritzburg-ers who are enthusiasts of the pipe-smoking Mr Holmes. I thought Mr Deane’s portrayal of “Clark of College” [as Mr Clark was at times known], then in his pomp, was especially memorable,” he enthused.

(That Marwick fell victim to one of the author’s well-known April Fool’s pranks that had him initially believe that the story was an authentic, Conan Doyle-penned tale is another story altogether!)