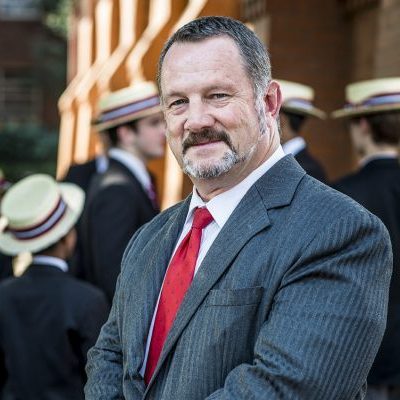 Christopher John Luman attended Wynberg Boys’ High School, before embarking on a professional career in education. He studied at Wellington Teachers Training College and Cape Town Teachers College receiving the High Primary Teacher Diploma (First Class). Whilst teaching at his alma mater, he graduated with a BA major in English.

In 1997, Chris and Carmel moved to New Zealand with their young family, where Chris took up a position at Rathkeale College, Masterton. They spent 16 years in New Zealand before returning to South Africa to take up the position of Headmaster of Maritzburg College in March 2013. During his time in New Zealand, Chris furthered his studies and was awarded a Post Graduate Diploma in Sports Management (Coaching). Chris was a very successful coach, being involved at provincial, national and international level for rugby and provincial level for cricket. He has also been Subject Head of English and Drama over the years and is passionate about the dramatic arts. He climbed the ranks and eventually was Senior Deputy Headmaster and served a period as Acting Headmaster at St Paul’s Collegiate in Hamilton, New Zealand. In 2018, he graduated with a Master of Education degree in Education Management. Chris has two children and four grandchildren from a former marriage, and he and Carmel have two sons together, Malcolm and Philip, who attended Maritzburg College, and one granddaughter.