This weekend, College welcomed over 700 boys and staff from Pretoria Boys high to the campus for a full round of sporting and cultural activities, including rugby, hockey, squash, table tennis, mountain biking, chess and golf.

College won 22 of their 25 rugby games played against Pretoria Boys High School, losing just 3. Our 1st, 2nd, u16A, u15A and u14A teams enjoyed good wins on a day which saw many supporters gathering on Goldstones despite the rain and cold. There were 18 hockey teams in action, with College winning 9, drawing 5 and losing 4. All the games were close ones, with 26 goals for our RedArmy teams and 14 against.

Our 1st, 2nd, u16A, u15A and u14A teams enjoyed good wins on a day which saw many supporters gathering on Goldstones despite the rain and cold.

Saturday’s encounter between Maritzburg College and Pretoria Boys High School was the first exchange between these school in three years due to the Covid-19 pandemic. In what is usually a very tight and tense affair between the two schools, the weather did its bit by making the day a damp and rainy occasion. Maritzburg College started the better team scoring two tries by number 14 Luyanda Kunene and inside centre Liam Prinsloo, both of which were converted by scrumhalf and captain AJ Knoetze. This lead was shortened quickly in the second half with a try by PBHS to cut the deficit to 9 points, with the score being 14-5. College hit back with a well worked driving maul which led to hooker Bayanda Luthuli crashing over to stretch the lead to 21-5. As the game began to open up, outside centre Litelihle Bester ghosted past his defender and raced away to put the game to bed with scoreboard now at 28-5.

The first half was a very cagey affair at first with both sides trying to come to grips with a greasy field and an even greasier ball. College scored the first try of the half after a sustained period of dominance which led to them having a scrum on the right-hand side of the field, deep in the Boys High half. From the resulting set-piece, flyhalf  Ayrton van der Linde managed to find some space between his opposite 10 and 12 and set up Kunene for the easiest of tries. The try seemed to galvanise both teams as the game began to swing back and forth, with College looking to score quickly again whilst Boys High wanted to strike back first. Things turned for the worst for Boys High when Bester managed to find the narrowest of gaps in midfield to burst through towards the try line. He was brought down by a desperate defender, but this was to no avail as Prinsloo muscled his way over from the resulting breakdown.

Pretoria Boys High started off the quickest with a lineout and driving maul which saw them crash over for a try. College had numerous opportunities to extend their lead, but the final pass often went astray, or the wrong decision made which put paid to this from happening. College’s efforts were not in vain as they made the most of their opportunities count with a very well worked lineout drive which allowed hooker Luthuli to score the try. College managed to strike again when Bester raced away from within his own half to score a marvellous solo effort. Pretoria Boys High did not lie down, as they kept on hammering away at the College defence. Boys High managed to get much more purchase in the match but the College defenders prevented them from adding to their tally. In the end the score-line did not change, and College hung on for a well-deserved win on Goldstones. 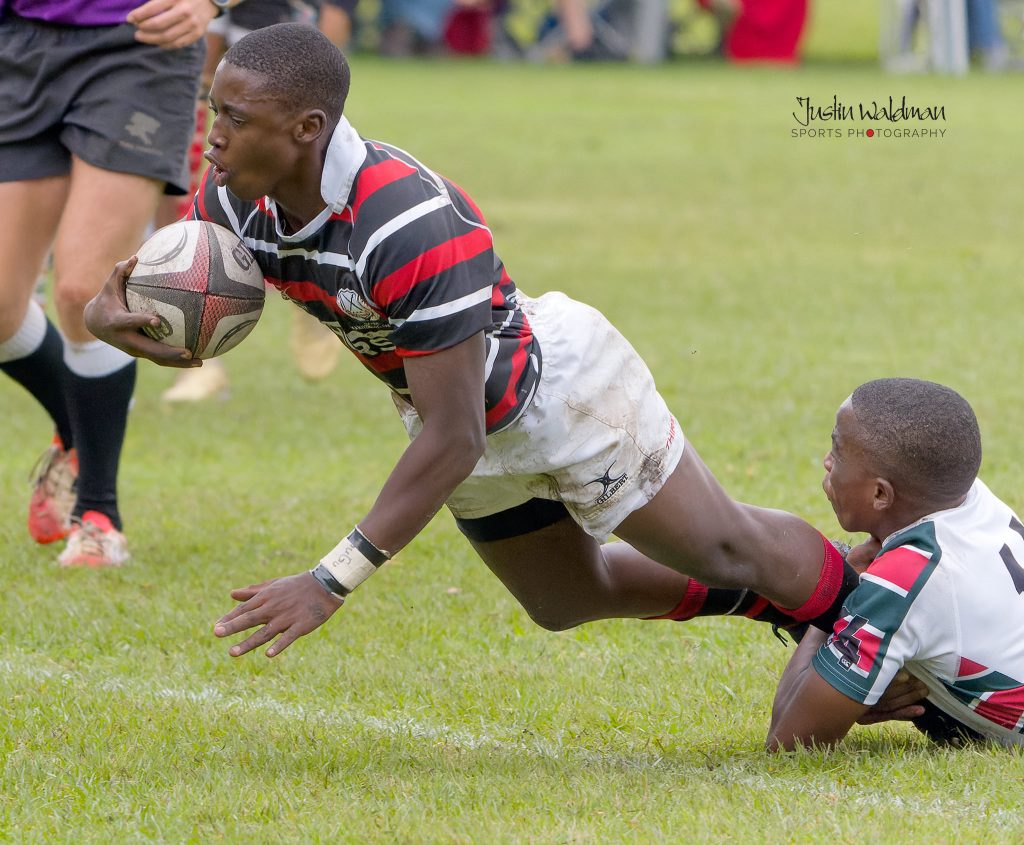 College played 18 matches against PBHS, winning 9, drawing 5 and losing 4. All the games were close ones, with 26 goals for our RedArmy teams and 14 against.

Hosting Pretoria Boys is always a highlight to the sporting calendar and having them back on Pape’s after a two-year break was enjoyable. They are a relentless opposition who bring a different energy to any other team College plays against. Saturday was no different with the Pretoria boys in fine form as they looked to try and take an early lead on Pape’s.

It was College who had the first chance to open the scoring in the game when captain, Matthew Ponter, had his drag-flick well saved by the PBHS goalkeeper, who would go on to make a few crucial saves in the game. On the stroke of half time, PBHS had their second penalty corner and their first shot at goal, which was easily saved by Roan Marais. The score was dead-locked at 0-0 at half time but there was so shortage of excitement.

The PBHS goalkeeper was sent off early in the second half after sliding and taking out Oliver Currie. He earned a five minute yellow card which could have seen a stroke being awarded instead. In the 10th minute of the second half College had another chance to take the lead. Connor Fulton’s shot from the top of the circle was saved by the reserve goalkeeper and the rebound fell to Oliver Currie who had a one-time shot that missed the goal by a few centimetres. College would rue this missed chance as moments later PBHS went ahead. College failed to clear the ball out of their circle and an unmarked striker did well to deflect the ball which was passed to him from the base-line. PBHS would use their momentum to find a second goal, after earning a penalty corner when the ball hit a College foot in the circle. A hard and low drag-flick found the back of the net to make the score 2-0 with 10 minutes remaining.

Going two goals down meant that College pressed harder to find that first goal. They had one shot from Phiwa Dlamini saved before Alex Styan was able to eliminate a defender on the top of the circle and beat the keeper on his far post to make the score 2-1 with 6 minutes left on the clock. PBHS would hold out to earn a hard-fought victory on Pape’s. 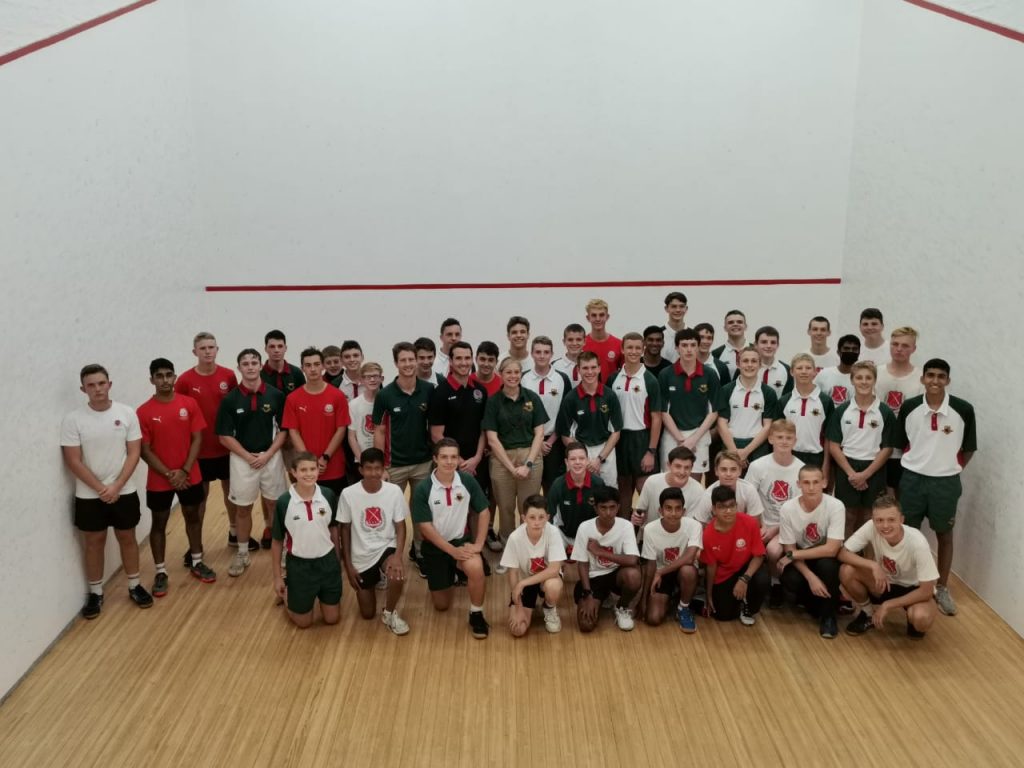 College’s senior and junior teams were excited to play PBHS as part of the weekend exchange. Both teams won their respective encounters, and College finished with an 16-8 victory.