This weekend, College took on teams from DHS in cricket, water polo and basketball fixtures.

College fielded 13 teams this weekend with 12 of the games against DHS, and one game against Michaelhouse. College won 8 of their matches, 3 were abandoned due to bad weather, and they lost just the 2 games.

It was the last game of the season and probably the last for the year for our 6th formers, so the 1st XI’s convincing win was especially rewarding. DHS won the toss and had no hesitation in electing to bat on a good wicket, but with the overhead conditions suiting bowling – the decision did not disappoint College Captain Caleb Hibbert. At the start of the bowling innings, the College bowling attack of Andile Simelane and Bryn Brokensha bowled inconsistent lengths and this allowed the DHS batsmen to settle and they were able to punish anything loose.  DHS justified their decision to bat first, racing to 58 for no wicket in the first ten overs. College were rewarded in the 11th over, when first change bowler Cayden Hohls, on debut, broke the 58 run opening partnership, having the DHS opener dismissed, with a fantastic catch at slip, by Stefan Delport. Keyan Gace and Hohls bowled superbly, using the conditions well to slow the DHS run rate.  DHS got to the 100 mark in the 27th over. Wickets fell at regular intervals, the College bowling and fielding improved and did not allow DHS to build any meaningful partnerships.  The 9th wicket partnership of 30 was broken by Bryn Brokensha who was rewarded with 2 wickets at the death. The pick of the bowlers was undoubtedly Hohls who bowled with great skill to pick up 4 for 44 in 9 overs.

College once again got off to a great start through Stefan Delport and Makabongwe Ngcobo, the opening partnership worth 97 in 15 overs. Ngcobo was first man out for a well-played 45. Three quick wickets followed and at 110 for 4, College had allowed DHS back into the game. Johnathan Van Zyl and Gace steadied the ship with a 54 run partnership, Gace getting out with College needing 14 runs to win. Van Zyl ensured there was no late drama getting his team home to win by 5 wickets with 19 overs to spare. 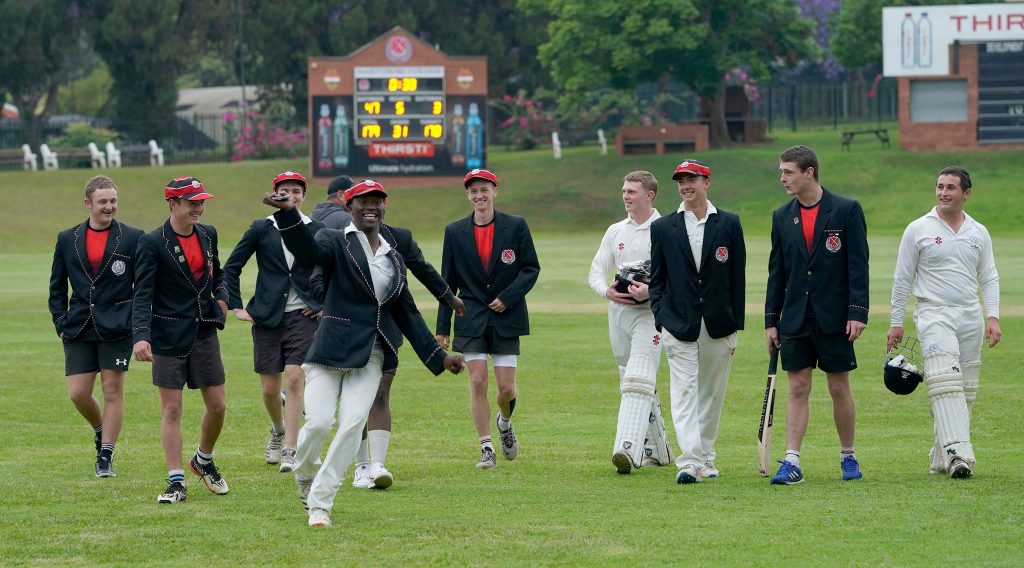 It was a great day for our basketball teams against DHS with all the games being played at home.

Despite threats of rain, all the outdoor fixtures went off without a hitch. Inside the Alan Paton hall, when it came time for the first team game, nerves were high as the boys stepped into a battle in which Maritzburg College had come out second for over 5 years. The first two quarters were a power struggle as the teams went back and forth with DHS holding the lead for much longer than College. It’s unknown what was said to the boys during the halftime break, and perhaps it was just the spirited supporters singing “Boys of College” but the third quarter saw a different Maritzburg College step onto the court. The team played like a well-oiled machine, staying tight in defence and selflessly creating gaps for one another on offence. For the second time in two consecutive weekends, the 1st basketball team, scored 100 points in a 40 minute game, with T. Crawford being the scorer of the 100th point this week. The team worked as a unit and there wasn’t a single player who didn’t score. In the end, however, it was rising star C Henman, who made the biggest difference on paper, managing to put an unimaginable 30 points on the board.

Unfortunately it was tough day in the pool for the waterpolo teams with 4 losses and 1 draw for our boys against DHS. Our 1st water polo hosted DHS at College, and the game began with College taking an early lead from a penalty from T Roux. DHS came back and took the lead in the first chukka 1-3. In a game that we knew was going to be tough, College fought hard and showed great spirit by never giving up. DHS managed to keep their lead in the game, despite the strong performance of Z Rowe in goals, and College eventually went down 7-12.