“They shall grow not old, as we that are left grow old:
Age shall not weary them, not the years condemn,
At the going down of the sun and in the morning
we will remember them”

To the haunting sounds of the Last Post and Reveille, with a quiet and heartfelt dignity, and accompanied by the ceremonial laying of wreaths and the lowering of flags, honoured guests together with current and retired Maritzburg College staff, pupils and old boys joined in the annual Remembrance Day ceremony outside Clark House. Of particular poignancy was to see a few red poppies flowering along the pathway to the memorial, grown from seeds brought back to College from Northern France.

Remembrance Day has special significance at Maritzburg College, given the school’s contribution of 261 past pupils and three teachers killed in various skirmishes, battles and war since the first old boy casualty fell in 1873. This year, our ceremony bears the proud theme of “The War in the Skies”, as we honour and remember especially, the 54 Old Collegians from both World Wars and the Korea War who died in aerial combat, in the tragically commonplace air accidents, or while on duty in the Air Force.

Today we again formally married the Remembrance Day Ceremony with the bi-annual unveiling of plaques for the Wall of Remembrance. Seven new plaques have been added to the Wall, with family and friends of the people whose lives we honoured attending the ceremony.

The ceremony began in College’s chapel, with Master of Ceremonies and Deputy Headmaster, Mr Matthew Marwick, welcoming special guests to the service including Mr Bruce Lesur (MCOBA Vice President), Col Reggie Purbrick (formerly of the 17th/21st Lancers),  and Maj-Gen Hugh Paine, formerly of the SA Air Force, from the Class of 1969.

Current staff member Mr Graeme Waters (OC 1975) opened proceedings with a scripture reading and prayer, after which College’s Deputy Headmaster, Mr Brandon Swart, spoke about significance of the day. Honorary Life Member of the MCOBA, Mr Martin Hellberg paid tribute to the 54 Maritzburg College airmen who paid the ultimate sacrifice in war, and as is tradition, read the obituary of one of these men, 2nd Lt NL “Rosie” Watt (RFC), followed by the Air Force Roll of Honour. 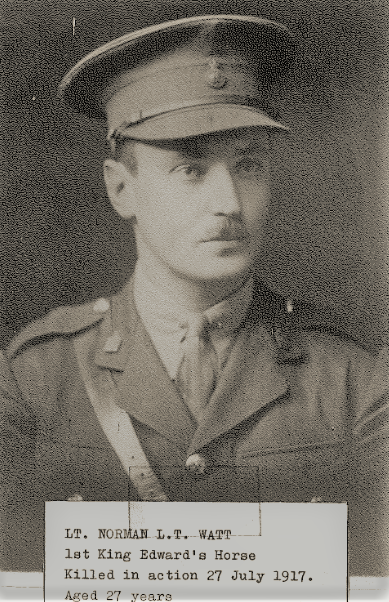 Norman Lindley Watt, born on January 29 1890, entered Maritzburg College in February 1904. He left at the end of 1909, having spent a productive six years at the school, and earned the nickname of “Rosie”. “Rosie” Watt served as captain of both rugby (in 1908 and 1909) and cricket teams (in 1909), while also showing athletic prowess winning the long jump and the 120 yards hurdles, coming 2nd in the 100 yards, and coming 3rd in the 440 yards. After formally leaving school in 1909, Rosie continued his studies a graduating with an honours degree, and in 1911, was awarded the Natal Rhodes Scholarship to Pembroke College at Oxford University, but was unable to complete his degree following the outbreak of war in 1914. His brother, 2nd Lt William Watt, was the Natal Rhodes Scholar the following year and served in the same squadron in the fledgling Royal Flying Corps.

At the outbreak of the First World War, Rosie found himself attached initially to the 1st King Edward’s Horse Regiment, and in due course, he was transferred to 53 Squadron of the RFC.

An aerial observer, Rosie was killed on July 27 1917, after the pilot of his aircraft was killed in combat and Rosie, seated behind his dead colleague, had landed the aircraft using the rudimentary controls available to him. He died of his wounds shortly after being taken to a first aid post – it is said that he held on until his brother, William, arrived at his bedside before he died. He is buried at the Torreken Farm Cemetery No 1, at Heuvelland in Belgium. We remember 2nd Lt Norman Watt with honour.

The ceremony ended with the reading of the sonnet High Flight, arguably the most famous poem to emerge from World War II, written by Pilot Officer John Gillespie Magee, Jr., of the Royal Canadian Air Force.

Oh! I have slipped the surly bonds of Earth
And danced the skies on laughter-silvered wings;
Sunward I’ve climbed, and joined the tumbling mirth
of sun-split clouds, – and done a hundred things
You have not dreamed of – wheeled and soared and swung
High in the sunlit silence. Hov’ring there,
I’ve chased the shouting wind along, and flung
My eager craft through footless halls of air . . .
Up, up the long, delirious, burning blue
I’ve topped the wind-swept heights with easy grace
Where never lark nor even eagle flew –
And, while with silent lifting mind I’ve trod
The high untrespassed sanctity of space,
Put out my hand, and touched the face of God.